When choosing your ride, you could never go wrong with picking a good motorcycle. However, every good motorcycle has a competing motor scooter that offers features you normally can’t find in standard motorcycle models.

To answer the burning question of motor scooter vs motorcycle we have decided to lay out the pros and cons for both. But, before we get ahead of ourselves, let’s first discuss the difference between a moped and a scooter. This probably looks like it came out of left-field, but for those that are new to scooters might have the misinformation that a moped and a scooter are one and the same.

A moped is a two-wheel motor vehicle with a platform for your feet and has a small engine with less than 50cc and a top speed of 19mph, but we wouldn’t fault you if you assumed that description fit a scooter instead. And although moped aficionados would argue that it was lacking as there was no mention of pedals to start the helper motor, most moped models nowadays don’t have pedals. Some models even have the same step-through frame design as scooters. 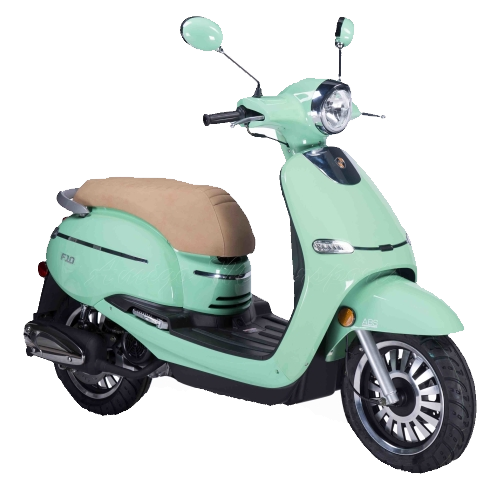 With this blurred line between these two motor vehicles, it’s no wonder that people often blend them together. So, what is the difference between a moped and a scooter? Well it comes down to the engine at this point. Scooters have an engine that’s between 50cc to 250cc which translates to 30-60mph and unlike with mopeds, scooters don’t require you to pedal to help start its motor.

And although some mopeds now have platforms for your feet to rest on, it’s not as accommodating as a motor scooter.

Now that you know the difference between a moped and a scooter, it’s time to finally talk about the advantages and disadvantages of scooters and motorcycles. Of course, we’ll start things off with the scooter.

Pros and Cons of Scooters

Nowadays, most motor scooters have this step-through frame design that allows you to easily hop onto the seat since it’s lowered to the ground. This is great for people suffering from bad hips that still want to go out and explore.

And part of why scooters are so safe is that their engine and drivetrains are mounted low and in the rear. This creates a low center of gravity for it which helps in balance. It also keeps you from having to worry that your scooter will throw you off its saddle if you suddenly put on the brakes.

This is partly the reason why a lot of first-time riders are recommended scooters. It’s by no means an insult, but more of a friendly concern among motorcyclists.

The main reason why scooters are recommended to new riders is its engine. Just like how there are manuals and automatics in cars, there’s also the same for scooters and motorcycles. It’s just a lot more common with scooters than it is with motorcycles, plus automatic motorcycles are fairly expensive compared to scooters.

Scooters use a type of automatic transmission – generally a Continuously Variable Transmission (CVT), which means that you don’t need to work a clutch or shift gears. This allows for aspiring riders to get comfortable in traffic and learn the ins and outs of riding with minimal risk involved.

Speaking of, in some states you don’t even require a license to ride a scooter. This is great for aspiring riders who have yet to earn their license but want to get some practice in.

And outside of that, scooters are easy to park anywhere you want because of its small size.

Vespas are popular in Paris for a reason, it’s because they completely cover the niche of mobility and speed that tourists look for when cruising through the capital. It’s better than a taxi and it’s a lot more enjoyable than going through the subway.

And with the speed that scooters have, it allows you to take in the scenery a lot better than when you’re in a fast vehicle.

We mentioned before how automatic motorcycles are fairly expensive, and they are! That’s why riders often cross it out of their minds because recommending a scooter not only gives aspiring riders the ease of use they’re looking for but it’s also a lot lighter on their budget.

And good quality scooters can come at such a criminally affordable price, yet the way they handle and operate would tell you that this should’ve been a couple hundred dollars more. And while yes, there are quality scooters that are expensive, you wouldn’t have to pay for much to get a reliable scooter for yourself.

You should also know that scooters are a lot easier to insure, which contributes to its overall cost.

Although we said a lot of good things about the speed and mobility of scooters, at the end of the day they’re built for cruising around. They’re not made to quickly get you around cities unlike with motorcycles.

And it’s important to note that while scooters can get a pass on most freeways, they’re banned from any Golden State freeways due to their small engine. This is why most scooters stick to local roads.

A 12-inch wheel is not ideal, but it’s what most standard motor scooters come with. With smaller wheels compared to motorcycles, scooters not only struggle with getting enough speed but also have issues building up stability.

This can become a problem if you decide to drive your scooter on a less than smooth road.

The same design that we praised for being intuitive and safe isn’t perfect. It has its flaws and one of the key issues is handling. Though some excellent scooters like the Vespa 300 have amazing handling, we can’t say the same for standard scooters.

Because their engine and drivetrains are mounted low and to the rear, this creates less weight on the front wheels which translates to poor feedback and steering. This can prove cumbersome on a curvy road.

There’s a lot more to say when it comes to both the advantages and disadvantages of scooters. For one, the personal issue that I have with scooters is the lack of manliness that’s been attributed to owning one. And it’s a shame as I do like scooters for their automatic transmission that makes driving easier for me since I prefer automatic rather than a manual.

Pros and Cons of Motorcycles

When it comes to speed, you can never go wrong with choosing a motorcycle. They’re able to provide over 160mph with the fastest bikes having an acceleration speed of 3.5 seconds. That’s the fastest 0 to 60 you’ll see on two wheels!

Naturally, a lot of racers find motorcycles to be the best outlet for their thrill-seeking needs. It’s why a lot of race tracks are often booked by motorcyclists who have a real need for speed.

A motorcycle’s fast acceleration and insane speed is also why it’s enjoyed by a lot of people who want to go to places quickly. And it’s why it’s the chosen vehicle when going on long journeys across scenic freeways as you get to enjoy the stretch of scenery without getting bored of it.

There’s a certain character that a motorcycle has that makes it look visually attractive than say a moped or a scooter. Especially with models like scramblers and Harley-Davidson bikes with their stripped-down designs.

But there’s more than just those styles of motorcycles, and it’s because there’s such a variety to choose from that there is a model of motorcycle that’s a perfect fit for you.

It should be said that a motorcycle represents freedom and rebellion from the mundane life, and that character shines through in a lot of different iterations of a motorcycle’s style. And it’s why it’s loved by enthusiastic riders that also play fast and loose with life.

Speaking of, a lot of motorcycles since the 1930s were built to survive a lot of wear and tear as a bunch of Englishmen put them through hell and back on courses that involved rough terrain.

At the time, motorcycles didn’t have the suspension that we’re familiar with today so a lot of them were customized – this gave rise to the style of motorcycle we know today as scramblers, which got their name from the sport we now call motocross.

Scrambling or motocross as it’s now called, gave rise to the development of the motorcycle’s durability and power. It’s due to the sport’s popularity that a lot of technological breakthroughs in motorcycle engines were made as well as in their suspension.

And continuing from that, it’s clear that motorcycles are a lot more fun to play around with than a scooter. Sure, some can argue that you can enjoy being on a scooter as much as you would on a motorcycle, and we wouldn’t hold them against it.

But just like how there are different styles of motorcycles, there are a variety of ways for us to enjoy them such as cafe hopping, motocross, and trials. And now, we can only say these for ourselves but motorcycle communities are a lot more fun to hang out with. They’re lively and kind people to be with.

With speed comes danger. A 2019 overview from the National Highway Traffic Safety Admission showed that there were 5,014 reported fatal traffic incidents in the U.S involving motorcycle riders.

And in 2018, there was at least a rate of 944 motorcycle accidents per 100,000 registered motorcycles in the U.S. These numbers are steadily declining over the years however.

As advocates of safety, we recommend that you wear proper protective gear whilst on a motorcycle. And to put on the proper type of helmet for the style of motorcycle you’re riding.

We mentioned before how automatic motorcycles are expensive, but It’s a matter of fact that motorcycles are generally more expensive than other two-wheel motor vehicles.. Especially if we’re talking about rustic models with parts that are much harder to come by nowadays at affordable prices.

And part of the reason why motorcycles are more expensive than scooters is the maintenance that goes into owning one. Motorcycle parts don’t last you very long, especially if you’re an avid rider who enjoys playing around with their bike. So, when investing into a motorcycle, don’t think that the motorcycle parts you started with will be the same ones you’ll still have after years of riding.

Frankly the hardest selling point for a motorcycle is their insurance. Unlike with scooters that you can insure without much of a problem, you’d have a much harder time with motorbikes. There’s a couple of things that greatly affect your chances of getting insurance for your motorcycle, but by far the most taxing is when it’s getting calculated for insurance.

In our opinion, despite all of its cons and shortgivings, we will still choose a motorcycle as our preferred two-wheel motor vehicle of choice. Because, while scooters are indeed safer you can still be safe on a motorcycle given that you wear the proper protective gear – of course this includes the right type of helmet to wear.

And while some can argue that scooters are better as they provide a leisure and enjoyable ride across capital cities, it’s not as if you can’t do that with a motorcycle. In fact, we’ve mentioned how there’s a variety of ways you can have fun whilst riding a motorcycle. Cafe hopping is just one of those leisure examples, but there’s so much more to choose from.

But, when it comes to the question of scooter or motorcycle for beginners, we would recommend that aspiring riders should start off with a scooter. As we’ve mentioned previously, scooters are great at helping riders familiarize themselves with the road without having to fiddle around with the clutch as most scooters are automatic.